The Sleepless Film Festival Presents an Academy Awards Special – A Drink with Mickey Rourke: An Evening at the Shamrock Social Club Just like the Grammy Awards, these American pop-culture celebrations can never seem to decide if they are honoring art or commending commerce.

Will these two never get along?

Although neither Darren Aronofsky or his brilliant film The Wrestler got their just due at nomination time, the performance of Mickey Rourke has received the nod.

After famously destroying his career – and resurfacing with his original dream of boxing greatness – Rourke has made a steady comeback, capped off by his Best Actor nomination for his portrayal of Randy the Ram. 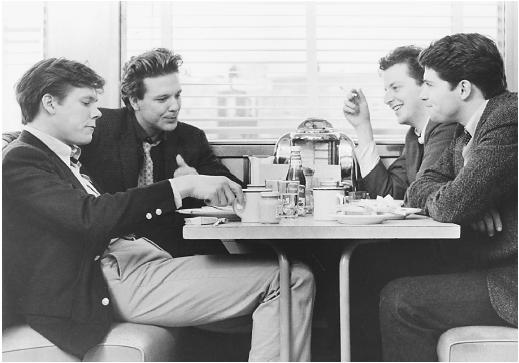 There has been a lot of ink spilled on his journey, but The Sleepless Film Festival would rather hear from the man himself.

Here are two long interviews that allow Rourke to tell his own story on his own terms:

First, The Mickey Rourke Story: One of the best actors of his generation, Mickey Rourke is nominated for an Academy Award for his role as a down-and-out pro wrestler in Darren Aronofsky’s film, The Wrestler. In this interview, Rourke talks about his troubled childhood, his early fame, his thirteen year exile from Hollywood, his passion for boxing, and his new work with Robert Rodriguez and Aronofsky.

And now, Mickey Rourke-The Angel Heart Interview: This candid interview with Rourke can be found on the DVD extras of the special edition of Rourke’s film Angel Heart. Rourke talks about his bad behavior, boxing, his dog (who makes a cameo) and the great Eric Roberts.

Now for something completely different…

This is the new video for my song “The First To Know”!

If you liked that, you’ll love this!

Check out my profile at Reverb Nation to see my updated press and bio.

This article was posted in academy awards, angel heart, darren aronofsky, eric roberts, interview, mickey rourke, short film. Bookmark the permalink. Follow comments with the RSS feed for this post. Trackbacks are closed, but you can Post a Comment.