Donald Cammell: Performance of a Lifetime

Even if you are a die-hard fan of outre, counter-cultural cinema, you might not leap to attention at the mention of the name Donald Cammell. 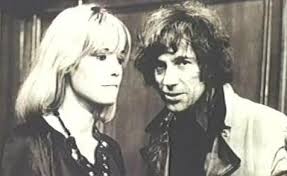 Anita Pallenberg with Cammell on the set of Performance.

A painting prodigy as a young man, Cammell was making a living with his brushes by the age of 19. Having built the foundations of a lucrative portrait painting career, Cammell moved to Paris in search of a more inspired path in art. This shunning of commercial opportunity for artistic possibility marked Cammell’s pursuits in the years to come. It’s both the reason why he’s not more widely known and why he continues to be re-discovered by lovers of cinema on the fringes.

A man of wealth and taste.

Returning to Swinging London in the 1960′s, Cammell decided that painting was dead and that he needed to turn his talents towards cinema. He lived a bohemian lifestyle and became the embodiment of the era’s libertine ideals. He befriended the Rolling Stones and teamed up with Nicolas Roeg to co-direct the classic Performance. Although Roeg is usually associated with the film, its troubled production saw Roeg disconnecting from the post-production process and the film’s final cut, with its revolutionary editing style really belongs to Cammell.

After Performance, Cammell maintained an uneasy relationship with the Hollywood studios. Holding his creative integerity in the highest regard, he made ends meet selling treatments and scripts while trying to develop projects and find funding independently. He wrote a script for William Burroughs that found the author playing a Supreme Court Justice who is kidnapped to North Africa. Cammell also starred as Osiris in his friend Kenneth Anger’s Lucifer Rising.

In addition to his friendship with Anger, Cammell had deeper links to the occult. His father was a friend of Aleister Crowley’s and he even wrote a book about the Great Beast. Cammell told Anger that he’d sat on Crowley’s lap when he was a little boy. Anger promptly sat on Cammell’s lap in an effort to complete the circle!

While Cammell would never secure a star turn in the Hollywood system, his place among experimental filmmakers is beyond dispute as this amazing portrait, which was probably taken sometime in the early ’70′s, demonstrates:

Find out more about Donald Cammell in this fascinating documentary, brought to you by our YouTube Channel.

Purchase the Cammell/Roeg classic at The Sleepless Bookstore and help Insomnia stay awake!

This article was posted in anarchism, Art, Occult, sleepless film festival and tagged Donald Cammell, Experimental Cinema, Kenneth Anger, Mick Jagger, Nicolas Roeg, Performance. Bookmark the permalink. Follow comments with the RSS feed for this post. Trackbacks are closed, but you can Post a Comment.