I woke early to a cloudy Sunday in the Old South, however, this dark little gem has polished my resolve. Wrap yourself in melancholy and join Terence McKenna for this trip through the history of The Great Work.

Terence McKenna’s The Alchemical Dream: Rebirth of the Great Work is a 2008 film produced by the good people at Sacred Mysteries.

In the mid-1990′s Terence McKenna and Mystic Fire’s Sheldon Rocklin teamed up to make this rich and exciting film. Little did they know that this would be their last film. Originally titled Coincidencia Oppositorum: The Unity of Opposites and filmed in Prague with Terence portraying his usual erudite rendition of the Irish Bard, this filmed classic takes us on a journey into the alchemical renaissance of King Frederick V and his wife Queen Elizabeth of Bohemia. Playing the role of John Dee, court magician for Queen Elizabeth of England, Terence McKenna shows us how the promise of a return to the tradition of alchemy was almost instituted in Europe. He also shows us that this early attempt at the creation of an alchemical kingdom actually lead to the European Renaissance and the institution of Cartesian science and the beginnings of rationalism within the western mindset. This incredible film is not only beautifully filmed but is Terence McKenna’s finest performance and a worthy eulogy to his genius.

The story of alchemy is a fairy tale – maybe more of an angel tale? – of sorts and, like any great fairy tale, this one comes with pictures:

One of Goosen van Vreeswijk's "flying bird" images. “‘To make the Bird fly’ is to free the Spirit from its material prison, that it may soar in the alchemical sky and bring back Below the benefits of what is Above. The engraving, Tabula Smaradina (“Emerald Tablet”) is Merian’s interpretation of the alchemical cosmology, a schemata and representation of the order of things. It appears (first) in Johann Daniel Mylius Tractatus III Seu Basilica Philosophica… (1618) and makes subsequent appearances in other works by the author, as well as in Lukas Jennis’ Musaeum Hermeticum, 1625 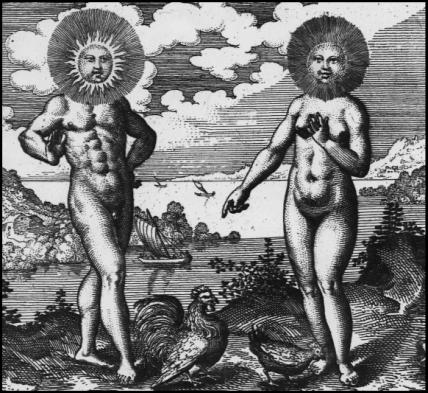 An engraving from Michael Maier's alchemical text, Atalanta fugiens, (1618), showing the Sun and Moon as the twin complementary principles of the alchemical work. Woodcut 8 from the Rosarium philosophorum, 1550

Check out the player below. Listen to songs from my CD’s Blue Turns Black and Plain Jane. �
JOIN THE MAILING LIST AND DOWNLOAD FOUR GREAT SONGS FOR NOTHIN’!

This article was posted in Art, Cinema, Occult, religion, sleepless film festival, Uncategorized and tagged Alchemy, Terence Mckenna, The Sleepless Film Festival. Bookmark the permalink. Follow comments with the RSS feed for this post. Trackbacks are closed, but you can Post a Comment.